Ever gone through times when you think you were starting to get ahead financially and then…ka-blamo!  Nature intervenes.

This past Friday started out normally.  I got up at 5am to help hubby get around for work, and sent him on his way.  Work for him was nearly 1 1/2 hours commute time, one way.  My son’s on his summer break so I let him “sleep” in ’till 7am.  We’d spent the past few days cleaning the house since my Mom and young nephew were flying in later that morning to spend a week with us.  The house was the cleanest it’s been since we moved in a year earlier (pretty sad, huh?) I was in the process of fixing breakfast for us when hubby called.

“Better get to the basement.” He said.  “A bad storm’s headed your way.”

I glanced out of the window.  Dark clouds were billowing in.

I sent my son, Karl, down the basement with one of our cats.  I finished fixing a mug of coffee and proceeded to step down in to the stairway when out of nowhere these horrific winds (macrobursts they’re called) slammed into the house.

Whooshing sounds rattled all around us.  Before I closed the door, I glanced back at one of the kitchen windows and saw nothing but a sheet of whiteness.

We sat on the sectional couch in the basement, listening to the roaring outside.  It wasn’t 10 minutes before the power went out.

Oh, great.  (Not really especially if you have a sump pump in the basement with no back up power supply)

The storm was over 10 minutes later.

Karl led me, fumbling and all, to the other side of the basement where the sump pump was, and we checked the “well” in the floor.  The water was rising rapidly.

The next twelve hours were a bit of a blur.   First part of it was spent in the pitch blackness of the basement as I frantically filled the only two buckets we could find with icy water while Karl ran them up the stairs and out the sunroom’s door and dumped their content outside.   This cycle went on for at least five hours.  By this time, hubby had returned home (worried since he hadn’t heard from us).   Karl, exhausted from all the running; and me, in shorts and sandals, up to nearly my knees in cold water, shivering.   The entire finished basement floor now under water.

Hubby declared it “lost.”  We shifted gears and began pulling everything that could be saved out of the basement, and filled the sunroom.

Then my Mom and nephew arrived.

A few moments later, the power came back on which brought on another set of problems for us.

With the sump pump now running overtime pumping water out of the flooded basement, the piping system became overwhelmed and there were leaks springing in several places.  The largest of them was in the laundry room up on the main floor.  Mom, hubby, Karl and myself worked in shifts baling water until the sump pump “caught up.”  Then the leaks ebbed until they completely stopped.

The ordeal began a little before 8am and finally subsided around 8:30pm.

Then, I went outside and oh…my…gosh… 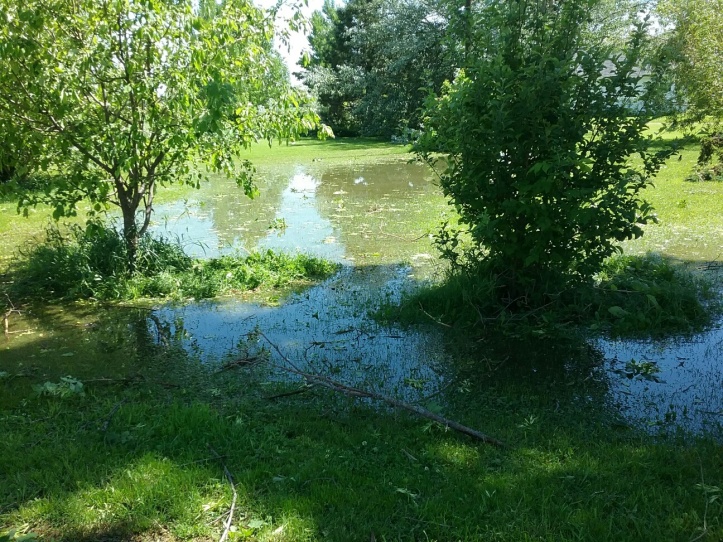 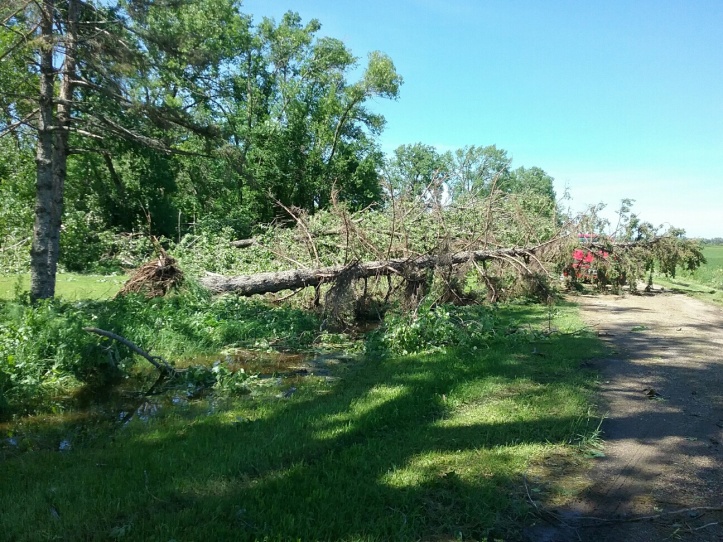 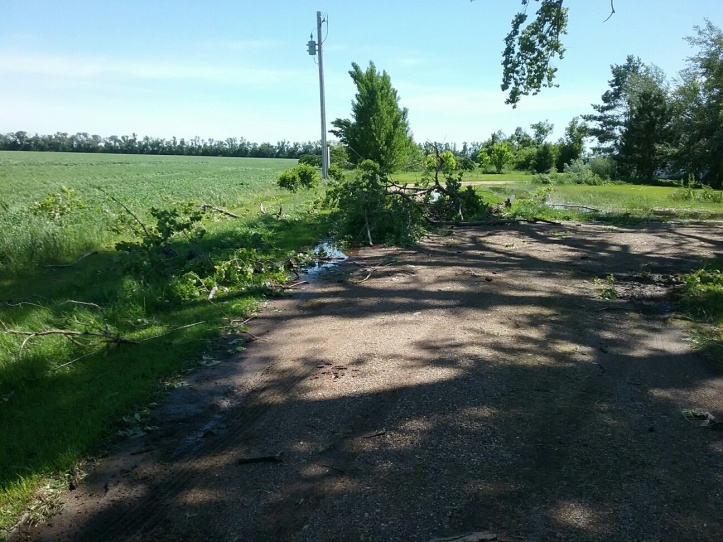 I was in disbelief (still am).  I later learned that many farmers around us have sustained similar damages and worse.  Dozens and dozens of crop fields are under water.

Lost or at best, severely damaged.

I wanted to cry; but as I looked around and saw my family…

And I felt so grateful. In spite of the damages our farmstead had sustained, we were together.

And that’s all that mattered to me.

So, now the cleanup process has begun; and even with insurance, I can’t get over how expensive everything’s going to be.  It will wipe out our savings, and max the credit cards.  Hubby had promised to take Karl on a trip to see his cousins out in western New York but it’s looking like we’ll have to cancel that because everything’s being devoted to fixing the damages around the house and farmstead.  As a last ditch effort, hubby has set up a GoFundMe account to see if he could raise money to send Karl on his trip east.  We’ll see how that one works.

In the meantime, God Bless you all and have a restful and safe evening.