Getting Out of My Own Way: Building a Writing Life By Samantha Bryant (Guest Blogger) 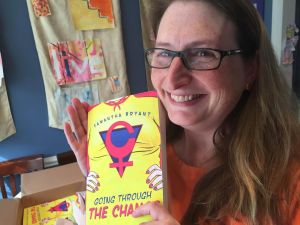 I’ve had it pretty easy in my writing life. Grammar and syntax come naturally to me. I had great English teachers who praised my creativity and encouraged me. My mother was a reader who indoctrinated me early in the joys of fiction, with the help of a great library. No one suggested that writing wasn’t a good career choice, or that I needed to be more practical. I’ve had support out the wazoo.

So far as a crucible to forge a writer in, my childhood was a good one.

Many writers have had more to overcome—unsupportive or outright abusive families, second languages, mental health issues, political persecution. All that is to say that I know I have very #firstworldproblems when it comes to my writing life.

See, I was always going to be a writer. Ask people who knew me in first grade. It’s always been on my agenda. An assumption, like being a mom and a teacher. A given.

As I grew up, I used to talk about writing a lot. I’d get all dreamy and imagine my future career as a world-famous novelist. But it was always a hazy dream, filmed through Vaseline so you couldn’t see the harder realities of it: the actual work. It was “someday.”

But I wasn’t doing anything to make it happen.

Sure, I wrote. Once in a while. When I felt inspired. When I was in the mood, or when one of my ideas was just so tenacious there was no escaping it. But I didn’t take myself seriously as a writer, and neither did anyone else. Why would they? It was like I thought some big publisher was going to somehow just find me and pay me to write without my ever having proven I could even do it. A fantasy discovery scenario. Not a career plan.

Then, I was turning 42, which Douglas Adams taught us is the answer to life, the universe and everything. It was my crisis moment. I told myself it was time to give writing a serious attempt. There was a lot less “someday” left than there once was.

The obstacles in my writing life were all internal. Setting priorities, finding focus, making time. I was my own worst enemy, putting my own dream last on the list of things I would spend my days and hours and years on.

That’s when I committed to a daily writing habit. It was a game-changer for me.

It was harder than that might seem. At age 42, I was in the middle of a teaching career and a marriage. I was parenting two daughters and a dog, maintaining a house and household, fighting the battle of the bulge, and trying to have some kind of social life. There were a lot of pulls on my time. And I’d made a habit of many years of giving my time away.

But, I started to insist on writing time. Slowly, over the course of a few months, I renegotiated my contract with life, and made sure there was room in it for writing. I gave up things that I could: television, social opportunities that I didn’t want badly. My initial goal was 250 words per day. Just one page. And I struggled to put down that many words. It took me two or three hours some nights. It was hard and frustrating.

But I am stubborn. And it got easier. Soon, I could write 250 words in half an hour. I learned that the words didn’t have to all be keepers. That sometimes, I had to write garbage to get it out and get to the good stuff underneath. I learned that if I could just get something on the page, I’d be able to make it better in the next pass, but that I had to give myself something to work with.

Now, I can’t imagine a day without writing. I write somewhere between 800 and 4,000 words a day, depending on other life demands. A day when I only write 250 words is a day that was full of lots of other life—parties, sickness, travel, or something—and a decision I made about my use of time.

My family notices when I haven’t written. They see me getting grumpy and say, “Hey Mom, did you write yet today?” the way other families might suggest you get a sandwich, take a nap, or take your meds. It’s that important to my equilibrium.

And because I’m writing every day, I’m getting better at it. I have flow. I’m finishing things, revising and polishing and publishing things. People are reading them. Some people even like them. This summer, I sent my third novel off to my publisher. I get to say things like “my publisher.”

So all this is to say, if you want to be a writer, you’ll have to write. Look at your life. Figure out what’s in your way (even if it’s only you that’s in your own way). And find your way around those obstacles. You can’t ever get there if you don’t start the journey. And it’s quite a trip!

Samantha Bryant is a middle school Spanish teacher by day and a mom and novelist by night. That makes her a superhero all the time. You can find her Menopausal Superhero series from Curiosity Quills on Amazon, or request it at your favorite independent (or big box) bookstore. You can find her online on her blog, on Twitter, on Facebook, on Goodreads, on the Curiosity Quills page, or on Google+, and now on Tumblr.